Mr B Wilson: That this Assembly recognises sustainable development, in general, and climate change, in particular, as central to its considerations in all relevant areas of government, including opportunities to use local economic and technological innovation strategies to place Northern Ireland at the forefront of the emerging green economy in Europe.

The Assembly has both a responsibility and an opportunity to introduce measures to address climate change. We must ensure that this part of theUKplays its part in meeting the challenge set out in the Stern Report, which suggested that climate change threatens to be the greatest and widest-ranging market failure ever seen.

The Green Party’s vision for a low-carbon economy extends across all Departments. Every sector and every citizen can understand it, embrace it and contribute to that vision. It is essential that the Executive introduce a climate change Bill in response to theUK’s draft climate change Bill, which was published in March 2007. A regional Bill would set outNorthern Ireland’s plans to integrate fully energy security, climate change and sustainable development into every Department’s responsibility. The Office of the First Minister and the Deputy First Minister would oversee that.

My party supports the establishment, under the auspices of the Sustainable Development Commission, of a high-level climate change and energy task force, with NGO participation, to advise OFMDFM on the contents of any regional climate change Bill and to monitor progress across sectors that include the Government estate, procurement, and staff transport schemes.

The Green Party proposes a minimum of 60% reduction in greenhouse gases by 2050, and that should include provision for annual targets and reports on performance and the measures taken. Moreover, we call for the introduction of a carbon-trading scheme across the Northern Ireland Civil Service. Such a scheme would ration the ability to pollute. Individual officers and sections would be forced to cap and trade permits if they wished to exceed annual allocations. That would assist the public sector in reaching its goal of becoming carbon neutral by 2015.

Sustainable development does not simply involve environmental considerations. It has profound economic and social impacts and opportunities, and those must be taken into account.Northern Irelandhas a growing economy that has changed from heavy industry to service industries. Energy consumption, especially of natural gas, is rising. We are at the end of a very long natural-gas pipeline, and both security of supply and cost make us vulnerable.

Northern Irelandis one of the most car-dependent regions not only in theUKbut inEurope. Electricity generation is predominantly fossil fuel-based. However,Northern Ireland, together with the rest ofIrelandandScotland, has some of the best potential for renewable energy development, particularly from on- and off shore wind and wave.

The Executive need to show leadership in tackling climate change and ensuring energy security through the use of renewables, as the coalition Governments in the Republic and inScotlandhave done; members of the Green Party and the Scottish Green Party have played a leading role.

Mr S Wilson: I noticed the Member’s comments about renewable energy. Does he not accept, however, that some of the greatest opponents of wind farms are members of the Green Party? They object to such farms being set up offshore, for example, because of the effects that they have on wildlife. On the one hand, the Green Party claims to promote renewable energy, but when such projects are proposed, its members are the first to jump up and down.

Mr B Wilson: I take the Member’s point. Some members of the Green Party take that attitude, but officially, and as far as I am concerned, the more important priority is to create energy security through renewables.

Unfortunately, our planning system does not seem to be responding to the challenges and opportunities that the development of an indigenous renewable energy industry affords. Some wind-farm planning applications have been waiting for approval for up to four years. That is unacceptable, and I ask the Minister of the Environment to expedite those applications. Given the seriousness and urgency of the need to respond to climate change and to ensure energy security, the planning process needs to facilitate, rather than hinder, the development of renewable energies such as wind and biomass. Planning guidance should be drawn up to facilitate and encourage the greater deployment of renewable energy.

We should consider introducing an integrated all-Ireland energy policy based on renewables. The developing single market in electricity should be structured in such a way as to allow renewable energy sources to integrate fully. The 2020 vision study, which is currently being managed by Action Renewables, will review the renewable energy potential of the two electricity networks and consider how that can be developed in the coming decade.

We should also support those in Northern Ireland who carry out pioneering work in renewable energy: Thermomax in North Down provides tubes for solar heating; Copeland provides scroll compressors for most of the heat pumps that are sold in Europe; Newmills Hydro makes hydro turbines and exports them across the world; and B9 Energy Services is the third-largest wind-farm company in the world. Harland and Wolff is a leader in tidal energy and wind turbines. Those companies are under threat from competition in theFar Eastand will need to continue to put efforts into research and development in order to maintain their position as world leaders, and we should help them to do so.

We should also be looking at newbuilds to encourage developers and home builders to make greater use of renewable energy. New homes should be constructed to the highest energy efficiency standards, with renewable energy integrated to provide heat and power where possible. We can learn from the recent initiatives in the Republic — my party colleagues John Gormley and Eamon Ryan have recently introduced legislation that requires greater energy efficiency in newbuilds. Similar green building regulations need to be implemented inNorthern Ireland.

The SIB (Strategic Investment Board) is spending billions of pounds on buildings such as schools and other public facilities that will be around for the next 50 to 100 years. Now is the time to ensure that the SIB’s board includes experts and champions of sustainable development and low-carbon technologies, most notably those in the building sector.

The scale of the public sector inNorthern Irelandis such that change exerts a massive influence on supply chains through staff and families in the region.

Significant opportunities exist forNorthern Irelandto champion theUK’s sustainable procurement prog­ramme in the public sector and to act as a location for experimentation.

Although Government must take a lead on sustainable development and tackling climate change, they cannot do everything. The business and the community and voluntary sectors have an important role to play. For example, the Government and the voluntary sectors have a partnership role to fulfil in advising local councils and Government bodies on the implementation of sustainable development programmes.

In conclusion, the Green Party calls for the entire Executive to take ownership of the energy-security and climate-change agendas and of response mechanisms. It is a popular Green saying that we do not inherit the earth from our parents but borrow it from our children. For the sake of our children and grandchildren, we must move quickly if we are to provide clear leadership on sustainable development inNorthern Irelandand make the transition to a low-carbon society. 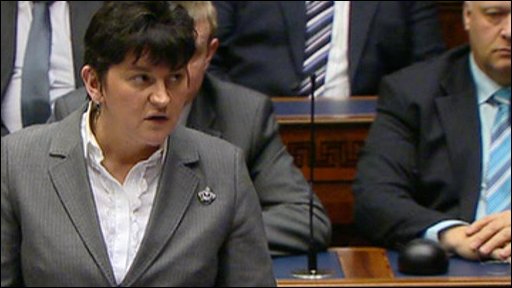 Northern Ireland Assembly, Tuesday 25 September 2007 Mr B Wilson: I thank the Minister for her response. I welcome her commitment...
By Bangor Northern Ireland © | Contact alv@hotmail.co.uk
Back to top