Although a political opponent of the DUP and Peter Robinson for more than 30 years I welcome his speech and vision for a shared and united future.

To hear a DUP leader speak positively about power sharing, partnership, a shared society and promoting a culture of tolerance and respect is extremely encouraging. I recall many occasions when I was subjected to considerable abuse from the DUP members for talking in such terms. It is easy to be cynical but I do believe this is a genuine attempt by the First Minister Peter Robinson to move away from our sectarian past.

Like Peter Robinson’s previous courageous decision to attend the funeral in a Catholic church of the  policeman Ronan Kerr who was murdered by dissidents it is a major step for any DUP leader. Indeed I recall in the 1980’s being stoned by DUP supporters after attending an ecumenical service in St Comgalls on Brunswick Road.

We have moved on. I welcome Peter Robinson’s speech and believe that it provides a real opportunity to move forward and away from what he called “a them and us society.”

I believe we should support Peter Robinson’s vision even though it still has a long way to go. It was a brave speech to make at a DUP conference and it is clear from other speeches especially Sammy Wilson’s  that many in the party’s grass roots do not yet share this vision and feel more comfortable with the traditional divisive politics which have served us so badly.

I believe that if we are to achieve the vision of a shared and united society Peter Robinson will need the support from many outside of the traditional DUP supporters and I am therefore happy to support him. 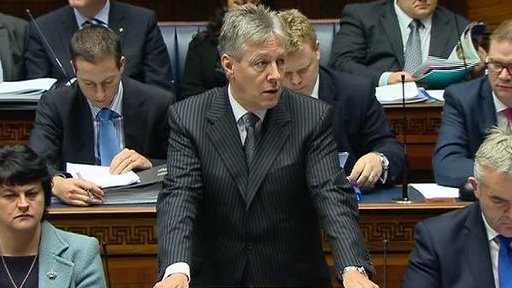 At a time when we are cutting out education and health service it is grossly irresponsible to waste £150 million on the proposed...
By Bangor Northern Ireland © | Contact alv@hotmail.co.uk
Back to top