It was encouraging to see the turnout at tonight’s rally in support of Aaron McMahon and the Clandeboye Village Association and in rejection of the appalling paramilitary attack suffered by Aaron the previous evening. The hundreds of local people attending made it quite clear that they would not be intimidated by paramilitaries.

In an excellent speech Louise Little from the North Down Community Network outlined the background to the attack and how since March Aaron and the CVCA had refused  to allow paramilitaries take over the area with flags and the bonfire and how members children had been attacked. She also referred to the fact that the CVCA had received no support from the authorities particularly the PSNI the council and local politicians

Aaron who was still visibly suffering injuries reinforced these points but emphasised to considerable applause that he would not be intimidated.

A number of politicians were invited to speak and say what they proposed to do to end the intimidation the Deputy Mayor and representatives of the UU, Alliance, Green Party,2 Independents , Basil McCrea(NI 21)and the DUP all gave their views. All were received respectfully if somewhat sceptically  apart from DUP’s Gordon Dunne who was heckled with enquiries as to what the DUP proposed to do about it.

It was an encouraging rally but it was emphasised that the public bodies must take action to support the CVCA and that the local community must unite and not weaken in the face of  intimidation.

I write to condemn the last weeks attack on Aaron McMahon the chair of the Clandeboye Village Community Association. This brutal attack was not only on Aaron but was an attempt to intimidate the CVCA and the local community. I was therefore pleased to join the rally at which the hundreds of local residents turned out to support Aaron and reject this attempt at intimidation.

As former MLA and councillor for the area I have worked with Aaron for many years including the provision of the play park which initially many councillors were unwilling to support. He has always resisted attempts by outside organisations to interfere in the workings of the CVCA and has in the past year been particularly courageous in highlighting the efforts by paramilitary organisations to take control of the Clandeboye area.

Unlike many community workers Aaron is not the front for or answerable to any political organisation. He is committed to the community and answerable solely to the CVCA and the people of the Clandeboye area. His tireless efforts to improve facilities have achieved much success  including the provision of the play park and the community centre kindly provided by Mr Gilpin and the Ebenezer Gospel hall. This hall has enabled Aaron to expand the youth activities, organise events for senior citizens and run charitable functions e.g. coffee mornings for Macmillan Cancer.

Unlike many community leaders he is not paid and he works full time at his printing business. The work he carries out is purely voluntary and motivated solely by his concern for the people of the Clandeboye area which has been largely ignored by local politicians.

It is easy to understand Aaron’s furious reaction to recent events. In May a meeting of the local community asked for support from local politicians and the PSNI to put an end to the paramilitary intimidation. Despite a number of meetings with the CVCA no action was taken and instead of sending out a message of solidarity with the local community the politicians and authorities showed a lack of concern at the situation .This no doubt contributed to last week’s horrific attack on Aaron in front of Michelle and the children.

The turnout at last Thursday’s hastily organised rally was wonderful and reinforces the communities overwhelming support for Aaron and the CVAC. However we must continue to press on the politicians, PSNI and other public bodies that we will not appease the men of violence and demand support for those willing to stand up to intimidation. 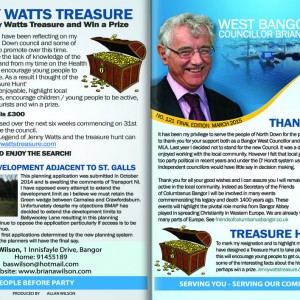