The term ‘Super Council’ is a total misnomer, despite the attempts of the media to talk up the merits of the new councils. The fact is that the powers exercised are less than those exercised by the 193 second tier local authorities in England.

No one would suggest that Harrogate Arun and Ashford district councils are ‘Super Councils’, but they have more powers than our new councils.

When the RPA was set up in 1998 it provided a wonderful opportunity to transform public administration in Northern Ireland. It started with a bang, and has now ended up as a damp squib. The aims were laudable in increasing local accountability, creating coterminosity, transferring powers to local government to attract new more professional councillors and most importantly to save money. It is clear that  the new councils  have achieved none of these objectives.

Following the Macrory Report, many traditional local government services were taken from local councils in Northern Ireland and centralised in Stormont departments or new Boards responsible to the Ministers and the Assembly. These powers ranged from Water to Social Services and included, Housing, Education, Planning, Roads, Public Transport, Libraries and Youth Services. Apart from a very limited role in planning ( major planning decisions are retained by the DoE) none of these traditional local government services have been returned to local government and yet the media continues to refer to them as ‘Super Councils’.

As I pointed out in the Assembly, I did not support the proposed reforms as I believe they will not achieve any of the original objectives, in attracting new more professional councillors, giving significantly greater powers to local government or most importantly leading to savings for the ratepayers. Indeed we already have talks of new expensive offices and the new councillors allowances will actually increase the cost to the ratepayers by 15%. The PWC predicted that the initial cost of the reorganisation would be £150 Million.

The reform will lead to a loss of local democracy and local accountability. It will also lead to the increasing politicisation of local government as indicated by the DUP/SF carve up of the council boundaries. 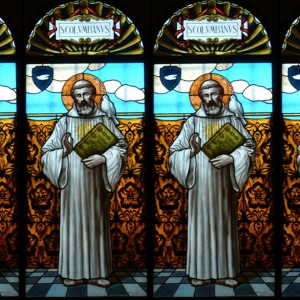 As secretary of the Friends of Columbanus Bangor, I attended the launch of the website by the Mayor of North Down, Alderman...
By Bangor Northern Ireland © | Contact alv@hotmail.co.uk
Back to top