We in the Green Party have been pressing for a cap-and-trade scheme for many years, and we welcome the fact that it is finally coming into operation. It will force businesses and public sector organisations in particular to take their energy consumption seriously.

There are many examples of wasted energy. Some of the major culprits are supermarkets. Major supermarkets and high street chains are some of the biggest consumers of electricity, but under the new scheme, they will be obliged to take part in the CRC commitment. As a result, the practice of leaving bright, illuminated signs and window displays switched on through the night will probably end.

The scheme is part of the Government’s attempts to improve energy efficiency and to combat climate change to meet the target of reducing greenhouse gas emissions by 2050 by at least 80% compared with the 1990 baseline. The CRC is an opportunity for large businesses and public sector organisations to play their part in reducing dangerous carbon emissions. For businesses, however, the main motivation to cut energy use will be their bottom line. By cutting energy use, businesses stand to benefit from lower energy bills, and they could be financially rewarded through the CRC if they perform well in energy efficiency because they will then get additional grants.

On the basis of the figures provided, I am not convinced that the proposed reductions will meet the target of a 20% reduction by 2020. I am concerned that the caps may be set too high. We have to monitor how the caps are introduced. Although I welcome the draft Order, it is only the first step. We should expand on it to introduce a cap-and-trade scheme for all greenhouse gases, not just carbon dioxide.

We should learn from the experience of the European Union scheme. The EU introduced a similar scheme but it was largely ineffective because many industries initially reported inflated carbon use and, therefore, did not have to make significant cuts. We have to be sure that the baselines on which we are operating are genuine and that the firms that report their baselines do not inflate them so that they can lessen their efforts to reduce carbon emissions.

Even if sceptics do not accept the idea that we need to cut our energy consumption because of climate change, there are benefits for industry. Furthermore, as the Minister indicated, the public sector should set an example. I support the motion. 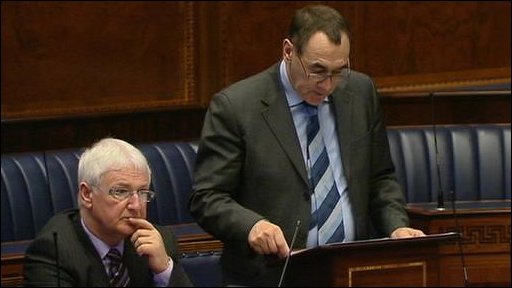 Northern Ireland Assembly, 16 February 2010 As a member of the Committee for Regional Development, I support the Bill...
By Bangor Northern Ireland © | Contact alv@hotmail.co.uk
Back to top