I sympathise with the Minister on having to delivering this Budget. I have no doubt that he is aware of the negative impact that it will have on the Northern Ireland economy. I am sure that he recognises that the Westminster cuts agenda is ideologically driven and economically illiterate and will have a disproportionate effect on the most vulnerable people in Northern Ireland.

The Minister will also be aware that, whatever impact the cuts may have on the rest of the United Kingdom, they will have a much greater impact on Northern Ireland. The rest of the UK may have emerged from the recession, but there is no evidence that we in Northern Ireland have. We are in a different phase of the economic cycle, and making further cuts when unemployment is still rising and house prices are continuing to fall will drive us back into recession.

I want to begin by welcoming the Minister’s decision to introduce a levy on large supermarkets and out-of-town shopping centres. I proposed such a levy in my speech on the draft Budget, so I am pleased and surprised that the Minister has taken up my suggestion. A similar levy was proposed by the Scottish Green Party and the Scottish Government. This involves increasing the business rate for large retailers with a rateable value of more than £750,000 and will apply mainly to supermarkets and out-of-town retail parks. As well as raising extra revenue, that would support small traders and town centres. If it encouraged people to shop locally, that would be more environmentally friendly. A levy would also mean that expenditure in local shops would remain within our economy and not be transferred to shareholders in multinational companies. It will make a positive contribution to our economy and our environment.

During the Second Stage debate, I indicated that I could not support the draft Budget. My position remains the same. I am still concerned that the Budget is not credible and lacks detail and that some departmental figures do not add up. The Budget includes some extremely optimistic assumptions, particularly in the area of asset sales and revenue raising. Although it is a four-year Budget, it will have to be reviewed after the election.

I remain concerned that there is still no Programme for Government. That means that we have no objectives, outcomes or targets against which the Budget can be assessed. It basically accepts the Tory analysis and its solution to the UK’s economic problems. The Green Party accepts the need to reduce public borrowing. However, the Tory proposals are vindictive and ideologically motivated and will create severe problems for the Northern Ireland economy. Taking demand out of our economy at the present time will inevitably lead towards recession.

The Tories claim that the cuts are fair and that everybody must share the pain. That is not the case. A recent report for the Institute for Fiscal Studies points out that the Budget is regressive and will hit the poorest hardest, particularly those with children. As with so many previous Tory Budgets, it is focused on cutting services to the poor, the elderly and the most vulnerable. Instead of imposing taxes on the banks and financial institutions that caused the financial crisis, the Tories have increased VAT, the burden of which falls heaviest on those with a low income. Similarly, the cuts in welfare, housing benefit, disability allowances and tax credit will have the greatest impact on the most vulnerable. According to the IFS, it is the most regressive Budget in generations. The fact that we in Northern Ireland are more dependent on public services means that we will suffer disproportionately. We should not slavishly follow the Tory-imposed policies. The Minister could have shown some flexibility.

I welcome the Minister’s commitment to the green new deal but am concerned by the lack of resources to implement that.

The budget for Invest NI is inadequate. I am concerned by that, because growing the economy and creating jobs remains a priority. The reduction in Invest NI’s budget means that we may not have sufficient funds to support the foreseeable number of new investment projects. We are at risk of missing valuable job creation opportunities.

My fundamental objection to the Budget remains the Health Service allocations. I welcome the additional funding for health, but that will do little to redress the long-term structural underfunding of the service. As I pointed out previously, I have no political axe to grind with anyone on this issue. I speak as someone who has had a long interest in health economics since my appointment to the Eastern Health Board in 1981. My concerns about health spending are long-standing and began with the previous Budget, in which our Health Department received an increase of 2·6%, while the NHS in England was given a 4% increase in real terms. Our 2·6% increase did not meet inflation, was the lowest for many years and compared badly with the average of around 8% during the previous five years of direct rule. Unlike in 2007, when I was one of the few MLAs to highlight underfunding in the Health Service, NHS funding has, unfortunately, become a major political debate. We need a rational, objective debate on the present state of the Health Service. However, it has now become just a political football.

The 2007 Programme for Government included new programmes to reduce the suicide rate, promote healthier ways of living, halt the rise in obesity and implement the long-delayed Bamford report. However, the Budget did not provide any additional resources to fund those programmes. The Appleby report compared the standard of care in Northern Ireland with that in England and identified a shortfall of £500 million over the CSRperiod. Therefore, not only do we have lower standards of care, but the gap between entitlements and expectations, compared with those in England, continues to widen.

Appleby concluded that, at funding levels then, access targets and waiting times would not match English levels in the foreseeable future. When I voted against that Budget, I warned that it would mean NHS cuts, job losses and longer waiting lists. Those have all come about and will be accelerated if we accept the current Budget. I accept the Minister’s assertion that health has received the biggest increase of any Department and that it consumes over 40% of the Budget. However, that does not address the funding of previous years. Funding should be based on need and not on what proportion of the Northern Ireland Budget it makes up. It has to meet increasing demand.

There have been demographic changes. Compared to the rest of the United Kingdom, we have more elderly people. We have more young people and more children. We have a much higher incidence of disease and much higher rates of cancer and heart disease. We have more smokers and more obesity. The differential in health expenditure between Northern Ireland and England has reduced significantly in recent years. A recent study shows that, taking account of age profile and deprivation levels, the Health Service in Northern Ireland requires 10% more resources per head than England, owing to the higher levels of need. In 2007, the differential was 4%. We now hear that the differential has actually swung the other way and that expenditure per head in England is more than in Northern Ireland.

On that basis, I certainly cannot accept the Budget. The Health Service should be taken off the political agenda. Let us try to sort the thing out. There is a definite need. Anyone who looks at it seriously will see that need is increasing because of demand. Demand, of course, is insatiable, but we have to provide more. 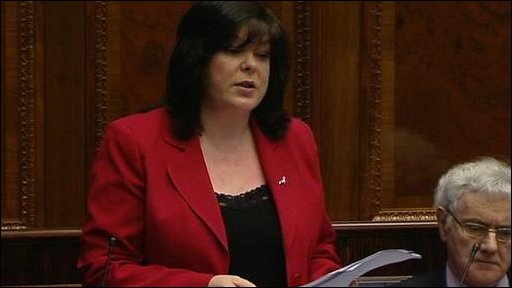 Northern Ireland Assembly, 09 March 2011, Private Members’ Business I declare an interest as a member of North Down...
By Bangor Northern Ireland © | Contact alv@hotmail.co.uk
Back to top