I was elected to the Assembly in 2007 as the first Green Party MLA. I promised to serve one term and therefore stood down in 2011 despite the fact that I would have almost certainly retained the seat.

As a result of my political career and the fact that I lectured in government for 30 years I have gained wide experience both practical and academic of public administration. It is essential that an official opposition is set up and fully funded. Too many decisions are taken without proper scrutiny and many actions of Ministers cannot be fully debated.

The requirement for MLA’s to designate as either unionist or nationalist can have no place in a modern democratic system .It creates second class MLA’s and reinforces the sectarian nature of NI politics.

The MLA’s who decline to designate as “ others” are in fact treated as second class MLA’s and denied a say in many important decisions such as the appointment of Ministers, setting the budget, and petitions of concern.“The others” may vote on such issues but their vote is irrelevant as it cannot influence the decision.”

To disenfranchise voters because they did not vote for candidates with either a unionist or nationalist identity is totally unacceptable in any democracy.

Some form of weighted majority can be devised which will protect minorities without disenfranchising the many thousands of voters who vote for “others”. Designation reinforces sectarianism and must be removed if we are to move forward.

Petitions of concern. These were designed to protect a minority from discrimination. In fact they have been used to protect incompetent Ministers who have taken actions which would be resignation matters in any other jurisdiction.

Education is probably my main interest as I lectured in BIFHE for almost 30 years. I am a Governor of Columbanus College and have served on the Board of Rathmore Primary School for 30 years including 5 as chair.  I was also a member of the South Eastern Education and Library Board and North Down and Ards Institute. I am particularly concerned by the number of young people who leave school with no qualifications. Health My interest in the Health Service began in 1981 when I was appointed to the Eastern Health Board. I later served as a member of the Health Council and chaired the Bangor “Save Our Hospital” campaign. In the Assembly I took a great interest in health and argued that it should not be made a political football, that it was underfunded and neglected mental health.

I have campaigned to reopen the 18 bed GP unit at Bangor Hospital. This is essential to take pressure of the Ulster Hospital. The closure of this unit is the responsibility of the DUP whose Finance Minister cut the Health budget and the DUP health Minister who agreed the decision. It is disappointing that North Down DUP MLA Alex Easton who was assistant to the Health Minister was either unable or unwilling to influence the decision to close the unit.

I will continue to campaign to get the unit reopened.

Economy The vision of a peaceful, united and prosperous Northern Ireland painted by the Good Friday Agreement has disappeared along with tens of thousands of young people who have given up in despair and left for greener pastures. Many would have preferred to stay but the political gridlock and economic stagnation have convinced them their future lies elsewhere.

The economy must be the priority. We must provide opportunities for our young people. Development of tourism In the past 20 years tourism has been the fastest growing sector of the World economy and we have largely missed out. In recent years the Executive has recognised the potential for expanding tourism and its ability to create jobs particularly in rural areas. However much more needs to be done.

Throughout the “troubles” there was no investment in tourism and our tourist infrastructure is significantly less than those of our neighbours. We have around 40.000 employed in tourism while in Scotland tourism provides 170,000 jobs, Wales 100,000 and in the Irish Republic 200,000 .There is considerable potential for growth and we need to encourage tourism by improving the infrastructure and increasing investment. However this will be pointless unless we can avoid projecting an image of a place steeped in gloom turmoil and conflict.

A skilled work force Any attempt to grow the economy requires a skilled work force and the recent decision by the Assembly to cut back funding for further and higher education is putting short term savings ahead of long term economic expansion. Already we hear of companies complaining of a lack of skilled workers. We need more investment in skills not less.

We should also provide incentives for young people who have left Northern Ireland to return. We often hear of the success of Northern Ireland from young people in creating new businesses in other parts of the world. In this age of IT and instant communications many of these businesses are easily transferrable and if we could create an attractive political and economic environment some could be attracted home.

Corporation tax reduction The Government has agreed to the Executive request for powers to reduce the rate of corporation tax in Northern Ireland. I have a number of concerns about the proposed reduction in corporation tax. There is a danger that companies will be registered in Northern Ireland but create no jobs here. Also any reduction in the block grant should be based on companies which have actually set up here and not on the assumption that companies will come in the future. There are many other low tax countries competing for international investment. Renewable energy It is clear that the new Conservative government has given up on its claim to be the greenest government ever. Its recent restrictions on and cuts onshore wind energy and the reduction in subsidises on solar power refutes that claim. It would seem that Stormont has followed its lead by ending the Renewable Heat Incentive scheme.

At a time when Denmark now produces 140% of its electricity demand from wind and sells the surplus to the European grid and while the Scottish government strives to generate all of its electricity needs from renewables by 2020, we appear to giving up.

“Onshore wind energy has become cheaper than electricity from any other source in the UK for the first time, in what could be a landmark moment for renewable energy in Britain.

Locally our wind turbine at Balloo has paid off all the capital costs and is generating electricity worth £135,000 per annum with a predicted life span of 20 years. The turbine will therefore generate electricity valued at least £1million pounds for the ratepayers in the next decade. As the first Green Party MLA I was able to introduce green issues which had previously been ignored including the protection of the green belt, pollution, renewable energy and climate change. I also introduced a bill to ban fox hunting which was heavily defeated.

Last week was the 18th Anniversary of GFA and it is clear that the enthusiasm and vision we saw for a better future has long ago disappeared.

While the violence may have gone the divisions in our community are as strong as ever as the political party’s use the past for political points scoring. This has resulted in Executive Gridlock.

This is why I am standing for the Assembly. When I stood down in 2011 I had no intention of standing again but like many others I am frustrated by the fact that rather than moving forward the Executive has in fact stagnated at best or at worse gone back.

I believe we must restore the vision outlined in the Good Friday Agreement of a community going forward together to provide a better future for our young people.

This is why I believe we must Focus on the Future, Go Forward together and Leave the Past to the historians. 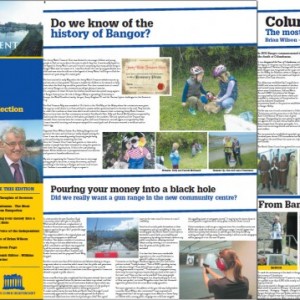