I don’t fly. So when in February 2017 my daughter sent me an Email with details of a round-the-world cruise the following January I was quite excited. The cruise would visit 5 continents and 40 plus countries or territories most of which I had never visited. I booked it immediately and on a cold Friday afternoon in January 2018 Anne and I embarked on Columbus to begin our around the world cruise. As a virgin cruiser I was slightly apprehensive particularly as the previous day we had experienced the wrath of hurricane Eleanor when travelling from Dublin to Holyhead. One original ferry was cancelled and the later one took nine hours to get to Holyhead compared to the normal voyage time of just over two hours.

We embarked at Tilbury along with 1500 fellow travellers and were immediately shown to our cabin which was more spacious than I had anticipated. We carried out a lifeboat drill and enjoyed a five-course dinner as we set out for warmer climes. Visions of the Caribbean, the Pacific Islands, Australia, China, India and Thailand filled our minds as we lay down for our first night at sea. These visions soon disappeared the following morning when we made our first port of call. Amsterdam was even windier and colder than London.

We love Amsterdam and have visited the city many times so rather than expose ourselves to hypothermia we returned to Columbus four hours early in time to enjoy our dinner. Calling in Amsterdam seemed unnecessary on a world cruise but we found out later that this enabled another 300 Dutch and German passengers to join this great adventure.

On leaving Amsterdam we sailed south and enjoyed three days at sea. This gives us time to fully explore the ship the investigate the activities and opportunities available and try to establish a routine for the rest of the cruise.

This routine was quickly established starting with a fry for breakfast in the Plantation Restaurant (unfortunately not an Ulster fry as there was no soda.) I would then read the ship’s daily newspaper complete the Sudoku and take part in the morning quiz. Then followed an hour in the gym, another quiz or lecture and afternoon tea. The evening started with another quiz followed the five-course dinner, a show in the Palladium Lounge and a late night dance to the Sounds of the Sixties.

I recognise that to many such a routine seems to be exceedingly dreary. Indeed Anne has often accused me of being predictable and boring. There were so many activities which I managed to avoid including bingo, chess, deck games, whist, the drama or art group, the casino, ballroom dancing and palates in particular I rejected suggestions that I should join the choir, take up knitting or quilt making. Our next berth was Lisbon which we had visited previously on our Interrail journeys. The temperature was still cool in the low teens and as we walked towards the city centre it started to rain. My shoes did not seem to like the wet Lisbon pavement as within 10 minutes I had fallen three times. Anne insisted that we return to the Columbus and that I should change the shoes. My embarrassment was complete when I slipped again on the gangway and a sympathetic fellow passenger shouted “you are supposed to hold onto the handrail”

I changed my shoes, waited until the rain stopped and bruised but not beaten we started to walk again to the city centre this time guided by a sat nav. This was not particularly successful as the sat nav ran out of juice and we got lost wandered around for a couple of hours and finally got a TukTuk back to the ship.

Out into the Atlantic Funchal Madeira

As we left the coast of Europe the temperature gradually increased and we soon began to feel we were really on a tropical cruise. This feeling was reinforced after three days when we arrived in Funchal the capital of Madeira and 600 miles from Lisbon. It was a beautiful sunny morning as we sailed into Funchal harbour. The city has a beautiful Mediterranean style seafront and is enclosed in a natural amphitheatre with gentle slopes rising to the wooded hillside. There was a cable car which took tourists from the seafront to the hill town of Monte giving them a wonderful view of the city as they glided above the rooftops. We decided to climb the hill to Monte avoiding toboggans hurtling down the slopes but when we reached about half way we were defeated by the heat and steepness of the hill. We stopped at a pub had a drink and sat there some time admiring the city and the sparkling blue bay below us.

We returned to the town and visited the bustling fish and fruit markets and the shops many displaying photos of the island’s favourite son Cristiano Ronaldo.

Anne took the shuttle bus back to the ship as she was not feeling well. l spent some hours taking in the history and buildings in the town centre and then made my way back to the ship. It was quite a long walk but I was surprised to find a queue lining up to take a selfie with a massive statue of Ronaldo. As a Messi fan I was not tempted to join the queue and I was pleased to hear one woman in the queue tell her friend she didn’t know who he was but she would take the photo because she was sure her son would know.

On leaving Madeira we sailed SE across the Atlantic to the Caribbean This stage would be a real challenge for me. As a news junkie I was concerned how I could cope without any TV news or the internet for 7 days at sea. In fact I need not have worried as there was plenty to do on the ship as the temperature rose to the mid-twenties’ I would spend more time enjoying the sun on deck and taking part in an unsuccessful “dolphin watch”. I did however see many flying fish.

This fully lived up to my boyhood image of the West Indies shaped by the Calypso cricketers in the 1950’s and 1960s. I was disappointed that I did not find the statue of Sir Garfield Sobers the greatest all-rounder of all time and someone I first saw playing against Ireland in Belfast in 1957. I later found out that it was outside Kennington Oval

It was a sunny day with temperatures in the high 20s. We visited the market.There was a wonderful atmosphere- throbbing, noisy, colourful vibrant and exciting. I enjoyed a rum in the Waterfront café and ignored the Arsenal match on TV. As we walked around harbour we saw the fishermen and their catch. They skinned some of the larger fish and threw the skin in the sea within seconds the turtles arrived for their afternoon snack.

There were boats of all shapes and sizes. One particular craft designed to carry about 50 passengers sailed slowly out of the harbour with about five hundred on board. Passengers hanging out of the windows on the roof and every possible space. As it lurched to the harbour entrance with loudspeakers blaring Caribbean music I wondered if it would ever get back. The following day we arrived in St Georges Granada. It was still very warm but it was raining. We took a tender to shore and sea was quite rough. While the Island and beaches were beautiful it is a small island and on a Sunday there was not much activity. However my friend Kevin a fanatical Spurs fan managed to find a shabeen type building where he was able to watch the Spurs match.

We took a taxi to Fort Frederick an ancient fort built by the French 1779 when they captured the island from the British. It now provides a wonderful panoramic view of the island.

Nice quiet day and very warm and we had a memorable conversation with a local character called Geoffrey. Three days after leaving Grenada we reached Central America the Columbian port of Cartagena the largest port in South America. This visit surprisingly turned out to be one of the most enjoyable days of the cruise.

It was a beautiful sunny day and on leaving the ship we were entertained by a local band and dancers in traditional costumes. I was particularly flattered when an attractive young lady invited me to dance. Perhaps my prowess at Caps had proceeded me.

At the harbour entrance and found a mini zoo with monkeys, pink flamingos, peacocks and many parrots wearing the blue and yellow colours of Bangor FC. We took a taxi and then the hop on hop off bus and as we travelled the city we learnt of the prominent role Cartagena had played in the colonisation of Central America. We saw its guns and the extensive fortifications built during the conflicts between Spain and Britain, This history was recognised by UN as Cartagena is designated as a World Heritage Site.

The city was beautiful with many historic buildings. The only downside was when the taxi driver tried to con us asked us to pay twice. A local tourist official spoke to him and this resolved this issue.

If Cartagena was one of the highlights of the cruise the next port of call Cristobel was undoubtedly the lowest. Instead of taking one of the organised tours to Panama City we decided to go independently and take the shuttle bus to Colon . This would leave us at a shopping centre in the city.

We should have realised there were problems. As we waited for the shuttle bus the previous bus returned to the ship virtually full. We decided to continue and arrived at the shopping centre which was unlike any centre I had been in before. It was surrounded by a ten feet high metal fence and each entrance was guarded by heavily armed police. There appeared to a fight and a number of taxi drivers attacked the bus protesting that the operation of the shuttle bus was denying them of customers.

The area around was dirty, slum-like with dilapidated buildings which clearly had seen better days. It was frightening and we quickly returned to Columbus.

Going through the Panama Canal The following day we entered the canal. The canal is 51 miles long but it took us almost a full day to navigate the three sets of locks and artificial lakes.

It was a fascinating day as we navigated the canal and watched the flooding and emptying of the lock chambers and the manoeuvring of the towing locomotives. We marvelled at the brilliance of the engineers who designed and constructed this waterway and reflected on the many lives lost during the construction.

There was also great excitement when we met the Queen Elizabeth passing through the canal.

BREXIT: 10 Reasons Why it Will Not Happen (update) 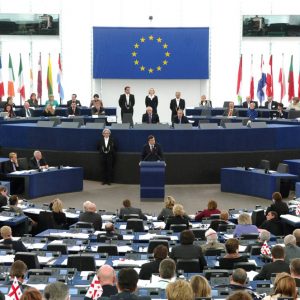 BREXIT: 10 Reasons Why it Will Not Happen (update)

Wednesday night’s vote along with last week’s “Agreement” reinforces my prediction made following the referendum...
By Bangor Northern Ireland © | Contact alv@hotmail.co.uk
Back to top