ALBERT MAGEE-Former Alliance Mayor of North Down   The former mayor of North Down Albert Magee passed away last week at the age of 94. He joined the Alliance Party at its formation and was elected to the new North Down Council in 1973. He served as a councillor for the Abbey DEA for 20 years. In 1981 it was my privilege on my first day as a newly elected councillor to propose him to be mayor of North Down. This was the year of the hunger strikes and intense political conflict and division. Despite this Albert strongly supported by his wife Audrey showed great leadership and despite considerable hostility worked to promote inclusiveness and tackle the divisions in our society. He carried out his role as mayor with distinction and integrity. Albert was an educationalist. He graduated from Stranmillis and Trinity College Dublin and throughout the 1950’s he worked the colonial civil services developing education in Mauritius and Sierra Leone. 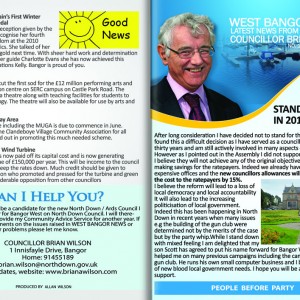 The Spring 2014 edition of the West Bangor News. Main issues relate to the fact that I am not standing for the new council,...
By Bangor Northern Ireland © | Contact alv@hotmail.co.uk
Back to top